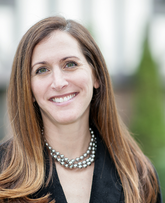 Amy E. Lerman is Professor of Public Policy and Political Science, Co-Director of The People Lab, and Associate Dean of the Goldman School of Public Policy at the University of California, Berkeley. She writes widely on issues related to political participation, public opinion, and public policy and is particularly interested in the political attitudes and behavior of the economically marginalized, youth, and racial minorities.

Professor Lerman's recent work examines the ways that growing economic inequality, persistent racial bias, and the rise of the carceral state influence citizens’ political beliefs, racial identities, and rates of political participation. Professor Lerman is the author of two books on criminal justice policy, The Modern Prison Paradox (Cambridge University Press) and Arresting Citizenship (The University of Chicago Press, winner of a best book award from the Urban Politics section of the American Political Science Association). Her most recent book, Good Enough for Government Work (The University of Chicago Press), which was awarded both the Woodrow Wilson Award and the Gladys Kammerer Award from the American Political Science Association, explores the widely-held stereotypes of government as wasteful and inefficient, and assesses the consequences of these beliefs for Americans' attitudes toward privatization.

​In addition to these larger works, Professor Lerman’s scholarship can be found in a variety of edited volumes and peer-reviewed journals, including the American Political Science Review, Journal of Politics, Perspectives on Politics, Public Opinion Quarterly, Annals of the American Academy of Political and Social Science, and Punishment and Society. Her work has also been featured in numerous media outlets, including the New York Times, Washington Post, USA Today, CNN and NPR.

​In addition to her academic work, Lerman has served as a speechwriter and communications consultant for national nonprofits and members of the United States Congress, a community organizer in Latin America and Southeast Asia, and an adjunct faculty member of the Prison University Project at San Quentin State Prison. She consults widely on issues related to prison reform, violence reduction, access to higher education, and law enforcement mental health.
Powered by