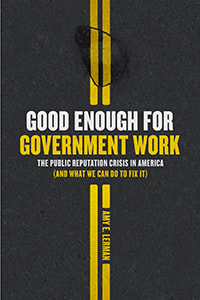 Good Enough for Government Work: The Public Reputation Crisis in America (And What We Can Do To Fix It)
Published 2019 by The University of Chicago Press

In this book, Professor Amy E. Lerman examines the growing perception of American government as incompetent and wasteful and explore the consequences of these attitudes for citizens’ preferences for public versus private provisions of services. Using a wide variety of public opinion surveys, as well as original data from a series of quasi- and field experiments, she shows that the increasingly negative stereotype of American government as a service provider has major implications for individual attitudes toward public spending, regulation, and privatization. This stands in marked contrast to traditional explanations of public opinion on these issues, which have primarily focused on partisan identification and political ideology. In fact, the public incompetence stereotype is widely held by Democrats and Republicans alike, and systematically biases the way that both groups understand and learn about different service provision options.

In fact, Lerman suggests that public perceptions of government versus private performance are frequently at odds with objective measures of quality and cost. There is a great deal of debate over whether public or private providers offer greater efficiency across a range of policy domains. However, what the data presented here make clear is that public opinion is systematically biased against public provision, even when public services provide a distinct advantage, and that this bias stems at least in part from the generalized belief that government is a less capable provider than the private market.

Good Enough for Government Work is available for purchase here and here.